Slippery Rock Ranch is a 740-acre working avocado ranch in the Goleta foothills near Santa Barbara where the coastline runs east to west. The ranch lies about five miles north of the Pacific Ocean.

Slippery Rock Ranch is a 740-acre working avocado ranch in the Goleta foothills near Santa Barbara where the coastline runs east to west. The ranch lies about five miles north of the Pacific Ocean. Hillside avocado orchards cover about 150 acres of the ranch. The avocado trees have the added benefit of reducing fire risk in an area of the country that is very prone to wildfires. In the last 100 years, wildfires impacted the property in 1921, 1955 and 2008.

The Mediterranean-like environment in the region is hot and dry in the summer and mild and wet in the winter. This climate shapes the plant and animal life on the ranch. The vegetation is primarily chaparral, a plant community consisting of dense, sometimes impenetrable shrub species found in this area because it thrives in the climate. While most chaparral species are highly flammable, they have adapted to the consistent wildfires in the area. Many of these species resprout from burls very quickly after wildfire. Other species come up rapidly from seed, some of which germinate better in the post-fire environment. This habitat also provides a foraging habitat for wildlife, including birds, reptiles and mammals.

Little canyons that are dominated by significant oak woodlands can be seen from all over the ranch. These coast live oak trees have a high fire survival rate as compared to other California oak species.

Wildlife on the property include a broad spectrum of common southern California bird species from raptors (red-tailed hawk) to songbirds to California quail. In addition, California alligator lizards, coyotes, mountain lions, bobcats and American black bears, among many more types of animals, can be found in various habitats on the ranch.

Slippery Rock Ranch is unusual in that it has its own water sources, including San Pedro Creek and several natural springs, and can sustain agricultural production without importing water from other parts of the state, greatly reducing the ranch’s carbon footprint. All water resources used by the ranch are naturally replenished. The creek supports a riparian habitat of willows, sycamore, oak and bay laurel.

The livestock on the ranch are fenced to keep animals out of the creek and avoid impacts to water quality. This is important to ensure animal excrement doesn’t increase nutrient levels and reduce oxygen, which would negatively affect the creek’s aquatic life. 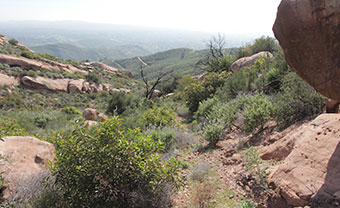 The ranch has unique geologic formations, including exposed rock and sandstone. The sandstone mirrors that of the ancient Jordanian city of Petra. For this reason, the ranch was chosen as the site for archeologists and stonemasons to determine how engineers in Petra built fantastic monuments into the desert sandstone without scaffolding or close by sources of water.

In 2010, Slippery Rock Ranch donated five blocks of sandstone from the ranch to the historic Santa Barbara Courthouse. The sculpture on the fountain in front of the courthouse — originally built in 1929 and representing Santa Barbara’s relationship with the ocean — had deteriorated and needed replacing. An exact replica of the original sculpture was carved from the Slippery Rock sandstone, as is detailed in the Santa Barbara Independent.

Slippery Rock Ranch, located in the Goleta foothills, is devoted to protecting the environment – from plant life to animal life to the area's rich history. Everything we do is with our commitment to the ranch's habitat in mind.
Learn More >